In this episode of the Cover2 Resources Podcast, Greg McNeil, Founder and President, interviews Judge David T. Matia. Judge Matia presides over the Cuyahoga County Drug Court, the first of its kind in Cleveland. He has had a powerful role brokering justice and compassion in the lives of Cleveland’s drug addicts.

In this episode, Judge Matia shares his story and the philosophy that drives his drug court. He explains how he came to the bench with little background in drug dependency but began to realize that “the revolving door of sending people to prison wasn’t working.”

Judge Matia focuses on reducing recidivism. “Untreated dependency will continue to cause crime,” he says. “If we treat the cause of the crime-driving disease, we get a guy or gal who goes back to society healthy and productive. They help their kids with homework. They hold a job. They pay taxes. They don’t get arrested again… it’s the opposite of a vicious cycle.”

At the Cuyahoga County Drug Court, Judge Matia has established the ultimate balance between justice and compassion. He is a hard-nosed judge, but he recognizes that legal mercy and medical rehabilitation will do far more to fight this epidemic than the unchecked prison cycle. 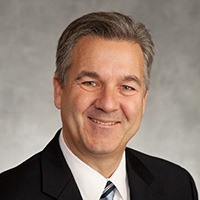