Greg interviews John Stuckey, the President of ARCHway Institute. ARCHway is a non-profit whose vision is to bring the treatment of mental health and addictive orders into the realm of mainstream medicine – similar to the treatment of other chronic lifestyle diseases such as obesity and diabetes.

Greg asks John about what the turning point was in his battle with heroin addiction. He explains that he hit a point after five years of opiate usage where he could no longer maintain his lifestyle.  “I was finally at a point where I was burning all my bridges. I couldn’t keep a job, I kept on going job, job, job, losing cars, losing apartments. I just couldn’t sustain it anymore and it finally got to the point where I was like ‘I can’t live like this.’ And to a point where suicide was appealing – suicide was appealing or I needed to stop and make some sort of change, because I was just done. But you know, one of the things was I couldn’t… I wanted to quit, but couldn’t quit. And so finally, I’d been through a couple treatment centers, but was pretty much always in a situation where [the question was] ‘What does John want to do?’ And this last time I was sitting there with the treatment provider and my family and they asked ‘What do you want to do?’ and I said, ‘Listen, stop asking me what I want to do because my addiction is not giving me the ability to close all of these doors. I’m going to give you two minutes of clarity here and that is if I have an opinion on this or throw out a suggestion, that is me trying to leave doors open down the line.’” It was at this point, he says, that he handed over control to his parents and started his usage of Vivitrol.

Listen to the podcast to discover how self-medicating and consistent opioid use can re-wire the brain and lead to substance abuse disorder. As well as how drugs like Vivitrol can help those suffering from opioid dependence reclaim their lives. 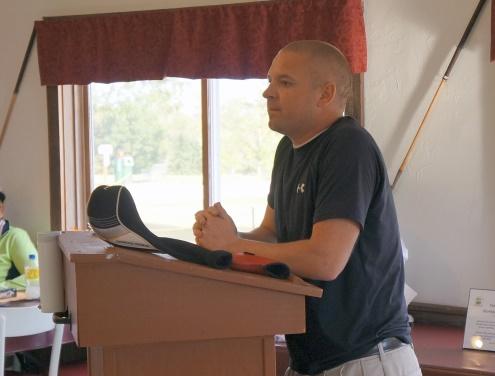 John Stuckey was born in 1984 in Maryville, Missouri.  John graduated from Avon Lake High School in Avon Lake, Ohio. He went on to graduate from Kent State University (Ohio) with a degree in Hospitality Management in 2008.

John moved to Lake St Louis, Missouri to take on being House Manager at Lake Forest Country Club in 2008. While in St Louis John became addicted to opiates.

In 2012, John’s journey started to change as he became committed that his life needed to change. His MAT Treatment program now included his monthly Vivitrol shot.

In early 2013 John had a vision and helped found the ARCHway Institute for Addictive Diseases and Co-Existing Mental Health Disorders. The organization believes in recovery from the disease of addiction. ARCHway has two basic missions. The first is to change the stigma associated with this disease through bringing awareness and educating individuals, families and communities about the disease. The second is to raise money to be used as scholarships for those who want to be in a recovery program but currently are turned away due to financial barriers.

John also joined ARCA Midwest in the summer of 2013 which is based in St Louis, Missouri. ARCA is a MAT Recovery Center. During his time at ARCA, John has had a variety of roles including Peer Therapist, Outpatient Manager and Inpatient Manager. John also became the house manager in late 2013 at the Sober Living House he was living in.