Greg continues his interview with Freddy Negrete, world renowned tattoo artist, Hollywood studio artist, and the co-author of Smile Now, Cry Later – an autobiography, co-authored with Steve Jones, about growing up in L.A. and the draw as a child towards both the empowerment of tattoos and the belonging that came with joining a gang.

Greg asks Freddy about when he hit rock bottom and what finally lead him to full sobriety. Freddy explains that it started when he was diagnosed with Congestive Heart Failure in 2004. “They labeled it drug-induced Congestive Heart Failure. I got really, really sick, and I remember I didn’t want to go to the hospital, but I didn’t know what it was. I couldn’t breathe and I couldn’t walk, and my ankles and legs swelled up… so eventually I had to go to the hospital. But I was still using the whole time. [Once they diagnosed me] I stopped using for a while and went on the medication they gave me because it made me feel a lot better… but it wasn’t long before I started using again.” Freddy furthers that it was shortly after this that he assumed custody of his younger son, which led to the lowest point in his substance use disorder. “I took him from a very safe place… and brought him to L.A. to live with me. And then I started using again. I was not a good father… I kind of let him do what he wanted and he started running around with his cousins in my old neighborhood… He ended up joining the same gang that I was a part of, being a part of the same conflict that we had when I was a kid and he got murdered. This was a tremendous emotional breakdown for me. Because the amount of guilt I felt for even getting custody of him, bringing him to L.A. and then not being a good father, not being a good example, and not trying to put him on a straight path – and then he dies. So I was miserable… in a way suicidal, but not just getting a gun and blowing my head off – I went into self-destruction mode. And I was using more drugs than I ever had before in my life… So I started getting sick again… And like clockwork, because it seemed like I always got arrested — I got arrested.”

Listen to the podcast to discover how this arrest coupled with the continued complications from his Congestive Heart Failure led Freddy to make a permanent change and push for treatment. 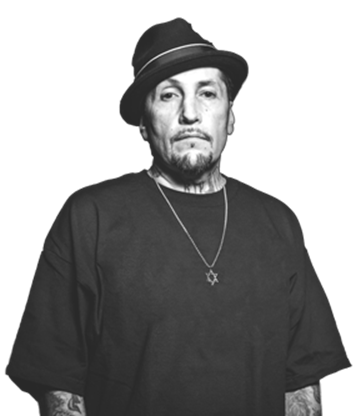 Pioneering black-and-gray tattoo artist Freddy Negrete was twelve years old and confined in the holding cell of a Los Angeles juvenile facility when an older teenager entered—covered in tattoos. Freddy was in awe, not just of the art, but of what it symbolized, and he wanted what this kid had: the potent sense of empowerment and belonging that came from joining a gang. The encounter drove Freddy to join the notorious gang La Sangra, and it didn’t take long before he was a regular guest at LA County’s juvenile detention facilities. By the age of twenty-one, Freddy had spent almost his whole life as a ward of the state in one form or the other. Enthralled by the black-and-gray tattoo style that in the 1970s was confined to the rebel culture of Chicano gangsters and criminals, Freddy started inking himself with hand-poked tattoos.

Freddy has been featured in the History Channel’s Marked series, in the documentary Tattoo Nation, on Spike TV’s Inkmaster as a guest judge, and in numerous print, online, and video publications. He has worked as a tattoo consultant on over 30 Hollywood films including Batman, Blade, Con Air and Austin Powers. He currently works at The Shamrock Social Club on the Sunset Strip. His life story is a riveting narrative: a journey from cholo gang member to evangelical preacher to Hollywood body art guru to a proprietor of his own tattoo studio and finally, addiction counselor.