Greg interviews Dr. Nora Volkow, Director of the National Institute on Drug Abuse (NIDA) who has also been named one of Time Magazine’s “Top 100 People Who Shape Our World.” Focusing on the science of addiction and the effects it can have on the human brain, Dr. Volkow discusses how physically addiction can take hold of the person and how each person has a unique fight with addiction due to their genetic makeup. Some environments can have a direct impact on each situation. Whether you come from an extremely protective environment or an environment of neglect, these elements can have a direct effect on your battle with addiction.

There have also been specific genes identified that make people more vulnerable to addiction. However, it is a combination of the person’s environment and what they are exposed to, as well as specific genes. Family and social ties are one of the most powerful forms of prevention and also the most successful form of treatment.

Dr. Volkow emphasizes the greatest success rates among those in treatment are those that seek out a community and are surrounded by a support system. She states, “The aspect of protection is fundamental in the whole epidemic.” A positive and affirming support system is an individual’s greatest form of prevention.

Take a listen to discover more about the science and anatomy of addiction and how we as a community can support others through their battle. 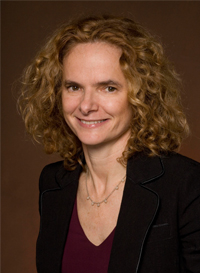 Dr. Volkow’s work has been instrumental in demonstrating that drug addiction is a disease of the human brain.  As a research psychiatrist and scientist, Dr. Volkow pioneered the use of brain imaging to investigate the toxic effects and addictive properties of abusable drugs.  Her studies have documented changes in the dopamine system affecting, among others, the functions of frontal brain regions involved with motivation, drive, and pleasure in addiction.  She has also made important contributions to the neurobiology of obesity, ADHD, and aging.

Dr. Volkow was born in Mexico, attended the Modern American School, and earned her medical degree from the National University of Mexico in Mexico City, where she received the Robins award for best medical student of her generation.  Her psychiatric residency was at New York University, where she earned the Laughlin Fellowship Award as one of the 10 Outstanding Psychiatric Residents in the USA.

Dr. Volkow spent most of her professional career at the Department of Energy’s Brookhaven National Laboratory (BNL) in Upton, New York, where she held several leadership positions including Director of Nuclear Medicine, Chairman of the Medical Department, and Associate Director for Life Sciences.  In addition, Dr. Volkow was a Professor in the Department of Psychiatry and Associate Dean of the Medical School at the State University of New York (SUNY)-Stony Brook.