Greg asks Mike about how the way drugs are sold and tracked has shifted with the advent of the internet. Mike explains that things like the dark web and even regular areas on the internet have made ordering drugs highly accessible.  “Technology disrupts things… History is full of times where technology advances and it changes the marketplace – and we’re seeing that right now in the drug trade. It used to be here in Cleveland and throughout the United States; the way drugs got here was they would often come over the Southwest border. They would then be driven up to a bigger city like New York or Chicago, and then they would be transferred to other cities and people would go buy them on street corners. What we’re seeing now is people can order their drugs online, often on the dark web, but not always; sometimes just through regular google. And it’s being mailed here, because as you said, it’s small, it’s not easily traceable, and we get 10s of millions of packages every year from overseas. So we could theoretically search every one of those packages and then people would be upset because the thing they ordered from Amazon took 10 days instead of two, and then the economy would come to a screeching halt – or we can use our best investigative methods to try and figure out what’s coming in here, but knowing full well that we’re not going to get every single thing or even most things.”

Listen to the podcast to discover how law enforcement and the Department of Justice are going undercover to take down online communities devoted to illegal trading and the sale of drugs. 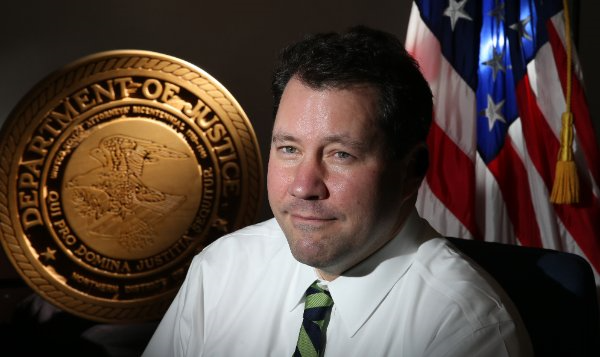 Mike Tobin serves as Community and Public Affairs Specialist for the U.S. Attorney’s Office for the Northern District of Ohio. He coordinates community outreach efforts for the office, including work forming the U.S. Attorney’s Heroin and Opioid Task Force and the Justice Department investigation into the Cleveland Division of Police. He also oversees media relations for the office. He was part of a team that won the Attorney General’s Award – the Justice Department’s highest honor — in 2016 for their work combating the opioid epidemic.

Prior to joining the Justice Department in 2010, Tobin worked as an editor and reporter at The Plain Dealer, Ohio’s largest newspaper. He oversaw the paper’s coverage of crime and criminal justice trends, including the discovery of 11 women murdered by a serial killer and the botched investigation of dozens of rape cases, among other projects. Before joining the newspaper, Tobin worked as a staff writer at Cleveland Scene and as a reporter at States News Service in Washington, D.C., where his coverage of Congress appeared on the front pages of the Miami Herald, Detroit Free Press and other newspapers.

Tobin is a 1995 graduate of Ohio University, where he earned a bachelor’s degree in journalism.

Cleveland.com : Tracing the path of a deadly batch of heroin from China to Akron